Dabbing 1 – Vaporize instead of smoke

In our first article on the subject of Dabbing we wish to explain what Dabbing is, the origin of the hype and the typical terms in use around Dabbing? At the end we present the most useful smoking devices and explain which ones are the most apt for which purpose.

Under Dabbing we understand, the vaporizing and inhaling of extracts such as Wax, Shatter or Oil (also known as Butane Hash Oil or BHO). In comparison to smoking the extract does not come directly into contact with the flame and therefore does not combust. The herb or extract chamber, often known as Pan, Nail or E-Nail (Electronic Nail) is heated until hot enough, then the extract is dabbed on the Pan or Nail. Where it instantaneously evaporates and the vapour is inhaled.

How everything started – America First

The main protagonists in the scene in the USA originally brought Dabbing into life with the purpose of using concentrates of grass with greater efficacy. The licensing in Germany of marijuana for medical use as well as the legalisation of possession in several German states has led to the cannabis industry jumping on this bandwagon. These days, extracts can be quite legal commercial products. Some observers say that the Dabbing hype will overtake the conventional marijuana market perhaps even completely overtake it.

In Europe we are still quite a way from such developments. Here Dabbing is still a marginal activity and the production of extracts still restricted to own consumption. Dabbing 2- Extraction with the Rosin technique  und Dabbing 3 Extraction with solvent .

In Spain a very active Dabbing scene has developed in the Cannabis Social Clubs. The Netherlands has put a limit on this development, with an upper limit of 15% THC content that has been set for the substances sold in coffee shops. In Germany the prohibition concept is also being gingerly talked about. The advantages of the concentrates have long been known by prescribing doctors and chemists.

Extraction is the process by which the active ingredient is refined from the plant. The result of this extraction is called extract or concentrate. Solid extract is called Shatter, opaque is Wax and liquid is oil. There are numerous names for specific extracts and we shall list these later in an extra article.

A Dab is a portion of this extract that one wishes to vaporise at the time.

A Dabbing tool or Dabber is the device by which the extract is deposited upon the Pan, Nail or E-Nail. Here as well we have more than a dozen further names to contend with, depending upon which form the tool takes. There can be Picks, Forks, Scrapes, Flat Heads und Cookie Cutter. This starts to get a little arcane. The dabbing tool is often a part of the Carb Cab, a cylinder shaped cap that during inhalation is placed on the E-Nail. This increases the airflow and reduces wast

From Hot knife to Vaporizer

Extracts can be smoked with a wide variety of devices and everyday objects. This ranges from simple utensils in every bedsit kitchen or car toolbox to high tech devices. We describe the devices in ascending order according to their technical complexity.

That one does not necessarily need particularly technical devices for Dabbing is demonstrated by our first examples. The hot knife and the car cigarette lighter are both often used in combination with a funnel. (Picture) In hot knifing one heats up two knife blades with a blowtorch until they change colour. One then applies the extract to one blade then squeezes it from the other side with the other one. The vapour is inhaled, either directly or indirectly with the aid of a funnel or intake tube. One can also heat up a Dab with a car cigarette lighter. A dabbing tool holds the Dab and then an already hot cigarette lighter is applied to the Dab and the extract is then vaporised.

Low-Tech – Simple devices to Dab with

The simplest device to dab with is the oil pipe. Heated up from underneath with a blowtorch, smear on the Dab and inhale the vapour. This is particularly good when one is travelling or when more complicated devices are not at hand. 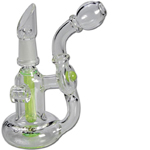 Technically more complicated and manufactured these forms of consumption are the Dabbing Bongs and the Nectar Collector.

A Dabbing Bong (or Dabbing Rig) differs from the normal bong with the presence of the Nail also known as a Pan. Which replaces the bowl. The Pan or Nail is not heated during inhalation but rather before. As soon as it is hot the extract, the Dab, is applied and the vapour inhaled. There are a large variety of different nails. These are presented in a separate Academy Article Dabbing 4 – Attachments. Dabbing Bongs are smaller than conventional bongs. Less vapour is produced than smoke in smoking bongs. In addition to this with Dabbing Bongs there are many more attachments to be had than with conventional bongs i.e. Percolators, Pre-Coolers etc.

In its simplest form a Nectar Collector is a simple glass pipe whose end is heated. In contrast to the Dabbing Bong the Dab is not smeared on a Nail rather it is inhaled from a bowl (made of glass, silicon or metal). The heated tip of the nectar collector vaporizes the concentrate. Without cooling and filtering by water it can happen that parts of the concentrate enter the breathing system. This is not only uncomfortable but also dangerous. For this reason Black Leaf recommends larger water-cooled Nectar Collectors. They come with fine ground glass connectors and have similar equipment characteristics as Dabbing Bongs. Made from Glass or Titanium, with or without percolator and extensive adaptable accessories. In the fully equipped version the nectar collector reminds one of a torture instrument in old science fiction films. This might of course scare purists away but makes this form, for experiment happy Dabbers, a real choice. 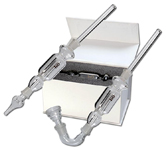 High-Tech: The High art of Dabbing

The top class of Dabbing are bongs with E-Nails or an electronic vaporizer. With this equipment the targeted release of specific cannabinoids is possible due to fine temperature control. At the relatively low temperature of 165℃ THC alone is released. At the higher temperature of 180℃ CBD, CBN or CBC comes into play too. The question of which Cannabinoid is released at what temperature and what effect it has is discussed in the Academy article Dabbing 9 – the correct temperature

The possibility of influencing the behaviour of extracts by regulating the temperature is important for cannabis patients. A patient who manages their pain uses different active plant compounds than a Multiple Sclerosis or Parkinson’s patient.

Electric Vaporizers are mobile, emit no smell and can therefore be used discretely in public.